Over the weekend, my husband and I made Harry Potter wands (I’m the PottHead, he was just in it for the chance to make something light up.)

We both used willow branches purchased online – I am not an outdoors person, so finding our own was out of the question. But willow has always been my favorite tree to admire from afar and there was a nice selection of thin branches (for me) and thick branches (to hide the wiring on his.)

One of my favorite touches regarding wands in Rowling’s books is how each one ‘fits’ its owner and that’s what we did when creating ours.

My husband’s is shorter, beefier and quite rustic – the gold paint he added to the bands looks well-worn. It’s a mix of high tech – the lighting – contrasted with natural – the leather wrap. And the matte grey color is classically him.

Mine, on the other hand, is so representational of me. I chose a wonky branch, with some interesting bends and sanded all the bark off. For the handle, I cut the ends off of a large wooden spool and glued them a hand-width’s distance apart, then fashioned a long snake of Sculpey clay and wrapped it around the area between to resemble thread.

As a proud Ravenclaw, I chose a metallic blue for the color (or I had metallic blue spray paint leftover from another project 😀 ) and added a touch of bronze to the spool ends so they’d stand out.

Our next plan is to create a display, but that might have to wait until we get tired of playing with them. I’m sure at some point I’ll stop wandering around the house saying “Accio!” while waving my wand, but in the meantime… “Evanesco!”

Have you ever have one of those projects that you just can’t make work no matter how hard you try? Welcome to my latest disaster…

Although I was originally on a wait list, I ended up getting a Funko Harry Potter Advent calendar when they were released last year. It was a lot of fun opening the doors each day during December. But, while the Pops themselves were nice quality, I worried that the cardboard box they came in would not hold up long term and I started looking for a different option.

Ultimately, I purchased a wooden Advent calendar that looked like a book ~ perfect for Harry Potter, am I right? ~ back in January and have been working to update it off and on for about nine months now.

The paint is both too thick AND too thin (don’t ask me how).

The pearls look so cheesy.

And the hinges don’t line up.

I thought I found the ideal numbering system in the wax seals, but they aren’t coming across like I’d hoped.

And to top it all off, the drawers themselves aren’t large enough to hold some of the Pops!

I’ve finally decided to give up.

It’s always disappointing when an idea in your head doesn’t come together like you hope. But, as much as I’d like to be, makers aren’t magicians. Sometimes, a project just fails.

Last year, I created a Harry Potter / Quidditch themed advent calendar in Gryffindor colors. This year, I realized I need to give the other Hogwarts Houses a little love.

Cast a summoning charm on the holidays with these quilted Harry Potter / Quidditch themed advent calendars and have a very merry – or is that “very Harry?” – Christmas.

150 points to Slytherin if you catch this Advent calendar by Dec 1!

150 points to Ravenclaw if you catch this Advent calendar by Dec 1!

150 points to Hufflepuff if you catch this Advent calendar by Dec 1!

Got to visit The Wizarding World of Harry Potter yesterday… had a GREAT time, but imagine my surprise when one of the shops* in Hogsmeade had fabric and buttons on display. Seems everywhere I go, sewing follows me, even into the magical realms of JK Rowling. 😀

*I found them in Gladrags Hats and Capes, so technically a tailor’s shop, but I’ll take it. Sewing is sewing!

I’m super excited to debut all 5 for Christmas 2017, but today, it’s all about JK Rowling’s world of Harry Potter. 150 points to Gryffindor if you catch it before Dec 1.

Cast a summoning charm on the holidays with this quilted Harry Potter / Quidditch themed advent calendar and have a very merry – or is that “Harry?” – Christmas.

We put away the last of the holiday decorations this weekend (my house is SO boring now!) but I still have a few more photos of quilted gifts to post before Christmas 2013 is just a memory.

Each of our nieces and nephews got a quilted pillow this year.

On my side of the family, the pillows were part of a long-standing family joke – I am the good daughter who went to KU; my sibs went to that other school. Such a shame their children must suffer, but as these pillows show, it sure doesn’t mean I love them any less.

On my husband’s side of the family, the kids are little older, so I was able to personalize their themes a bit more. We’ve got a couple of really good readers, a Broadway lover, a sports fan and one with quite the spidey-sense.

Everyone seems to love their pillows, hopefully as much as I loved making them! 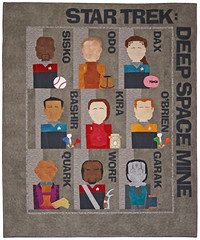 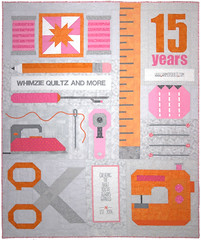 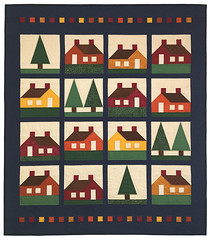